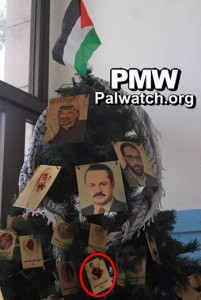 Palestinians from a Fatah student group decorated an Xmas tree with pictures of terrorist “martyrs” as well as Palestinian leaders who were known for inciting terrorism against Israelis, Palestinian Media Watch reported.

Among the terrorists pictured were Muhannad Halabi, who recently stabbed and murdered two Israelis, and Sheikh Ahmed Yassin, a founder of the Hamas terrorist group.

On its official Facebook page, the Shabiba group at Birzeit University in Ramallah posted pictures of themselves standing next to the Christmas tree. Behind them was a sign that read, “The way to freedom is a bullet and a martyr, a pen and a prisoner, an olive tree and a wounded, a crescent and a cross; Merry Christmas, [Fatah] Shabiba student movement, Birzeit University.”

Meanwhile, the official television station of the Palestinian Authority earlier this month broadcast a program for children emphasizing that the state of Israel is temporary and will cease to exist, according to Palestinian Media Watch. In one episode of the program, “Children’s Talk,” the host said regarding the Israeli cities of Haifa, Jaffa, Acre, and Nazareth, “The occupation (Israel) must know that we fully believe and are confident that all of this land belongs to us, the ’48 [lands] are all ours and will return to us, right?”

Mahmoud Abbas heads both the Palestinian Authority and Fatah.