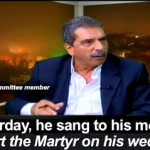 Amid the wave of Palestinian terror attacks, an official from Palestinian Authority President Mahmoud Abbas’s Fatah party, Tawfiq Tirawi, expressed pride in his 2-year-old son for wanting to shoot Israelis.

“Listen, my son is 2 years and 10 months old. Yesterday, he sang to his mother, ‘Escort the martyr to his wedding.’ He doesn’t know the meaning of this song (i.e., the Islamic belief that martyrs marry 72 Virgins in Paradise),” Tirawi said on Palestinian Authority TV, Palestinian Media Watch reported.

“Today his mother told me that he sang, ‘Daddy, buy me a machine gun and a rifle, so that I will defeat Israel and the Zionists.’ A boy who is not yet three! A Palestinian grows up with a feeling of belonging to the land, the homeland, and the people,” added Tirawi.

Tirawi, a member of the Fatah Central Committee, has in the past rejected any notion of coexistence with Israel. He was also involved with overseeing acts of terror during the second intifada.