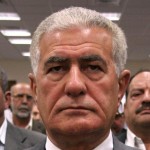 An official of Fatah-the party led by Palestinian Authority (PA) President Mahmoud Abbas that entered into a unity government with the Hamas terrorist group before the escalation of the recent conflict-recently said “there are no innocent Israelis.”

Senior Palestinian official and Fatah leader Abbas Zaki said Aug. 22 that he opposes the PA joining the International Criminal Court because the move means Palestinians who shoot Israelis could be tried in international courts.

“I’m against signing the Rome Statute (i.e., joining the International Criminal Court) as long as our country is occupied. If tomorrow you shoot, they’ll say you signed an agreement. This is not meant for people who want to liberate their country… I think the [Palestinian] people’s weapon is pure-they don’t want to kill. By the way, there are no innocent Israelis,” Zaki said, Palestinian Media Watch (PMW) reported Aug. 27.

This is not the first time Zaki has spoken in favor of Palestinian violence against Israelis. “Allah will gather them (Israelis) so we can kill them,” he said earlier this year, according to PMW.