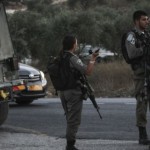 A Palestinian driver attempted to crash her car into a group of Israeli soldiers in the West Bank Friday afternoon. The woman was shot and pronounced dead at the scene, police said.

No troops were injured in the incident near the Palestinian village of Silwad, north of Ramallah.

The woman was identified in Arabic media as Mahdia Mohammad Hamad, 40, a mother of four.

In a separate incident Friday, a Palestinian man was reportedly killed in clashes with the IDF east of Gaza City along the border with Israel. Palestinian news outlet Al Watan Voice identified the man as 22-year-old Hani Rafiq Wahdan.

At least nine others were injured in the clashes, a Gaza Health Ministry spokesman said.

Later on Friday evening, Palestinians threw stones at IDF soldiers near the village of Bayt Furik, south of Nablus, and the troops responded with sniper fire. There were no immediate reports of injuries, according to Ynet. Source: Times of Israel