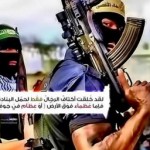 The Palestinian Authority (PA) on Wednesday blocked Palestinian protesters from marching towards the Beit El Junction, north of Ramallah.

The protest was organized by the Palestinian Fatah faction to celebrate the 51st anniversary of its first suicide car bomb attack against Israel, which occurred at that junction. PA President Mahmoud Abbas also heads Fatah.

Senior Fatah officials complained about the PA preventing them from protesting at the Beit El Junction, denouncing the PA leadership for “assaulting public freedoms, including the freedom of expression,” according to the Jerusalem Post.

The Fatah faction has posted several images on its official websites, as well as on its Facebook and Twitter pages, to “commemorate” 51 years of terrorism against Israel.

“Half a century of sowing terror in the eyes of the sons of Zion,” read one post on Fatah’s Facebook page, Palestinian Media Watch reported.

An image of the number 51 in the shape of a knife, a bullet, and a rifle was posted on the Fatah website with the text, “Revolution until victory.”