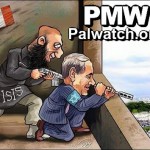 Through traditional and social media, the Palestinian Authority (PA) and the Fatah faction—which are both led by Mahmoud Abbas—blamed Friday’s deadly Paris terror attacks on Israel.

One of the cartoons showed Israeli Prime Minister Benjamin Netanyahu with an Islamic State terrorist near the Eiffel Tower; Netanyahu is pictured helping the terrorist aim his machine gun.

In the other cartoon, two matches in a matchbox are labeled “Terrorism,” with the head of one match shaped as an Islamic State terrorist and the head of the other match as an Orthodox Jew.

PMW also reported that on Sunday, an op-ed published in Al-Hayat Al-Jadida—the PA’s official daily newspaper—stated regarding the Paris and Beirut attacks, “The wise and correct thing is to look for who benefits. In short: They need to search the last place reached by the octopus arms of the [Israeli] Mossad [spy agency]…It is clear that its ‘Mossad’ will burn Beirut and Paris in order to achieve Netanyahu’s goals. He, who challenged the master of the White House, hides in his soul enough evil to burn the world.”