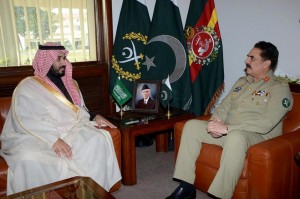 Sharif made the remarks in a statement after Saudi Deputy Crown Prince and Defense Minister Mohammed bin Salman met with him in the garrison city of Rawalpindi, adjacent to the capital.

Salman earlier arrived in Islamabad, making him the second top Saudi official to visit Pakistan in a week amid growing tension with Iran over Shiite cleric Nimr al-Nimr’s recent execution.

The visits came after Saudi Arabia and several of its allies announced the severing or downgrading of diplomatic relations with Shiite powerhouse Iran. Protesters in Tehran stormed the Saudi embassy and a Saudi consulate elsewhere in the country after Saudi Arabia executed al-Nimr, a prominent Shiite cleric and opposition leader earlier this month. Read more.