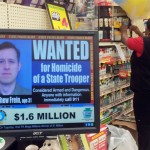 Canadensis, Pa. – Nine days after a gunman went on a deadly ambush at a state police barracks, authorities said Sunday night they have recovered one of the weapons he was carrying and believe they are hot on his trail as he travels on foot through rugged forests in northeastern Pennsylvania.

Investigators said they believe the suspect they describe as a self-taught survivalist had been planning a confrontation with law enforcement for months, if not years.

State Police Lt. Col. George Bivens revealed a few more details about the manhunt for Eric Frein, saying trackers have discovered items he hid or abandoned in the woods – including an AK-47 assault rifle and ammunition they believe he had been carrying while on the run. “We are pushing him hard, he is no longer safe and I am confident that he will be apprehended,” Bivens said. Read more here.