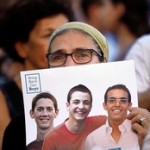 Abed a-Rahman Ghaminat, the Hamas leader responsible for sponsoring and planning the June 12 abduction of three Israeli teenagers, was released from an Israeli prison during the 2011 prisoner swap for IDF soldier Gilad Shalit, and had been involved in the September 1996 killing of IDF soldier Sharon Edri, Palestinian security officials now say.  They add that although the Hamas leadership repeatedly denied involvement in the attack, its military and political wings knew about the plans in advance and had approved similar activities.

After his release, Ghaminat joined a special office under the Hamas military wing in Gaza, which operated under the leadership of the Turkey-based Saleh al-Arouri.

The office hired several of the exiled prisoners to oversee the terror cells in the West Bank. Working from Gaza, Ghaminat was responsible for the Hebron area. According to the Palestinian sources, Mahmoud Kawasme – another prisoner freed in the 2011 deal – worked under Ghaminat in Gaza. Kawasme recruited his brother Hussam and transferred NIS 200,000 to his account to carry out the kidnapping.