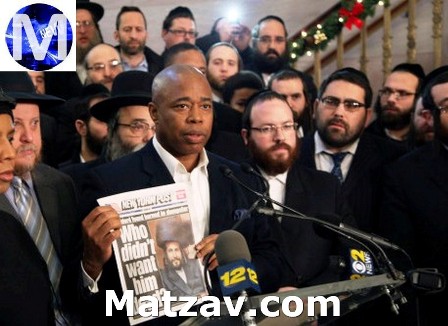 The New York Post sparked outrage today with its front page featuring a photo of R” Menachem Stark and the caption: “Who didn’t want him dead?”

He was joined by members of Brooklyn’s Orthodox Jewish community, who filled Brooklyn Borough Hall’s large rotunda, lining the walls and staircases, clapping and cheering as other officials and community leaders shared their anger.

“This is outrageous and unprofessional,” railed Councilman Mark Treyger, holding up the offending cover. “His grave is still fresh. He should not be put on trial! We need to find justice for his family.”

“New Yorkers, we’re a jaded bunch … We expect many bizarre things on the cover of our tabloids. But the one thing we do not expect is to literally kick someone while they’re down, and to condone the murder of an innocent victim. And that’s exactly what occurred in today’s New York Post,” he argued. “Even Osama bin Laden, when he made the front page of the New York Post, he-a terrorist who killed thousands of our citizens-got better treatment.”

Public Advocate Tish James called on the city’s government to cease buying ads in the Post for public notices, causing the room to erupt into applause. Two speakers referenced the Holocaust. (“If the Holocaust has taught us anything it is this: We need to condemn hate and hateful speech in its infancy,” one community leader said.) Many said they expected an apology in the paper tomorrow. “On the front page,” insisted Mr. Greenfield.