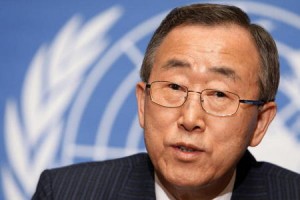 Just when you thought things couldn’t get any more absurd with the ‘international community,’ a spokesperson for United Nations (UN) Secretary General Ban Ki-Moon said Tuesday night that the UN has no “concrete evidence” that Eyal Yifrah, 19, Naftali Frenkel, 16, and Gilad Sha’ar, 16, were “actually” kidnapped by Hamas terrorists last Thursday, reports INN.

The spokesperson, Farhan Haq, was quoted by Voice of Israel public radio as saying the UN does not have an independent investigative unit that could confirm the kidnapping.

Making Haq’s words more confusing is the fact that Ban already condemned the kidnapping on Shabbos, noting particularly that two of the kidnapped Israeli students are minors.