Rabbi Michael Shudrich, the Chief Rabbi of Poland, has created a stir for attending a ceremony held in a church for Polish President Lech Kaczynski and his wife Maria, who died along with 95 others earlier this month when their plane crashed in thick fog on its approach to Smolensk airport, in western Russia.

The event was held prior to the funeral of the president and his wife.

The ceremony in Krakow was led by the Archbishop of Krakow, and the coffins were then carried through the city. Thousands of Poles lined the streets of Krakow to say goodbye to President Kaczynski. After the ceremony, the coffins were taken to Krakow’s Wawel cathedral.

But What has garnered attention in the global Jewish community, Matzav.com has learned, is a photo showing Polish Chief Rabbi Shudrich at the ceremony held inside a Krakow church. 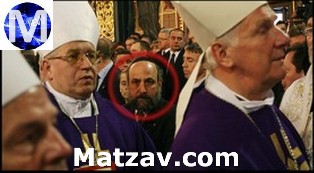 55-year-old Rabbi Schudrich was born in New York City and lived in Patchogue, New York, where his father, Rabbi David Schudrich, served as a pulpit rabbi. He received Conservative semicha from the Jewish Theological Seminary of America and later an Orthodox semicha through Yeshiva University from Rabbi Moshe Tendler. He served as rabbi of the Jewish Community of Japan from 1983 to 1989.

He went to Poland in June 2000 as Rabbi of Warsaw and Łódź, and in December 2004 was appointed Chief Rabbi of Poland. He is a member of the Rabbinical Council of America and the Conference of European Rabbis.

Since entering a church is forbidden according to halacha, the Polish Chief Rabbi’s decision to attend the ceremony – which was revealed in the photo of him in attendance – has many people up in arms.

Other Jewish rabbis and representatives, according to sources, remained outside the church during the ceremony.

The participation of Rabbi Shudrich in the ceremony has infuriated many rabbis in Europe and elsewhere.

Rumors of his participation were first denied by some, but were later confirmed after the picture from the Polish news agency PAP emerged. In the photo, he is seen standing between two cross-wearing priests.

The latest incident comes just months after a different gaffe, in which Rabbi Shudrich, in an interview with BBC, called Pope John Paul with the title of “zichrono livracha – of blessed memory.”

Rabbi Shudrich would not reveal who the posek is.