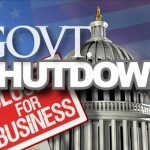 Another day, another $160 million.

That’s how much the economy is losing every day on average, thanks to the government shutdown, according to data from global markets research firm IHS cited by Bloomberg. Closed national parks, a semi-spooked stock market, the stop to some government work and other factors related to the shutdown syphoned $1.6 billion from the U.S. economy last week, IHS found.

Though $1.6 billion may sound huge, as Bloomberg notes, it’s a very small fraction of the nation’s $15.7 trillion economy. In fact, the long-term economic impacts of a shutdown may be minimal, especially as thousands of furloughed Defense Department workers have returned to work, according to the Washington Post.

What economists are really concerned about, WaPo points out, is the possibility that lawmakers won’t raise the debt ceiling in time to keep the nation from defaulting on its obligations. Congressional Republicans shut down the government in an aim to win a delay in key provisions of Obamacare and they’ve threatened to use the debt ceiling as leverage to try to do the same thing.

If Congress doesn’t raise the debt limit by October 17, the government will run out of money to pay its bills and won’t be able to borrow more, according to Treasury Secretary Jack Lew. The U.S. accidentally defaulted on its debt in 1979 on a much smaller scale than a possible debt ceiling breach would be this time around. Still, it raised the nation’s borrowing costs by about $12 billion, according to a 1989 study from Financial Review.

And in 2011, the last time we were in a major debt ceiling standoff, the U.S. lost its top credit rating, business and consumer confidence plunged and the impasse shook the stock market. All this, even though lawmakers ultimately reached a deal.