In April, the JTA reported on the controversy surrounding the debut of the Sacks Siddur, also published jointly by the OU and Koren. The JTA reported that ArtScroll also has approached the O.U. about publishing a forthcoming siddur based on Rav Yosef Dov Soloveitchik’s writings, according to O.U. officials. Artscroll didn’t get the job.

Like the Sacks Siddur which includes the commentary of England’s Chief Rabbi Sir Jonathan Sachs, the Soloveitchik Siddur is being published by Koren and is due out in Spring 2010, along with a separate volume of Kinnos and commentary for Tisha B’Av. 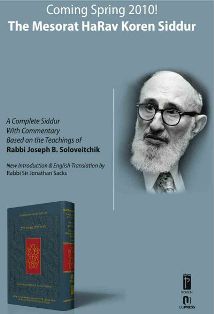 Last year, the Orthodox Union launched a new publishing arm, which its backers described as filling a “niche” in the Orthodox world, principally through the publication of the writings of Rav J. B. Soloveitchik.Leaders of the Orthodox Union, whose logo appears on the spine of the Koren siddur, were vague in the JTA report last year on the specific reasons why the organization decided to launch its imprint. Insiders said it is principally to serve as a vehicle for publishing Soloveitchik’s writings and is motivated in part by concern that ArtScroll may be sluggish in marketing Modern Orthodox titles.

“The last thing I would have wanted is a Haggadah among the 20 or plus different Haggadahs that ArtScroll puts out,” said one OU official familiar with the issue, referring to the Soloveitchk Haggadah, which was the first offering by O.U. Press. “I have no interest in having the 21st Haggadah be by the Rav. You flood the marketplace.”

Rabbi Haskel Lookstein of Kehilath Jeshurun and others have lamented that ArtScroll fails to reference many writings of Modern Orthodox figures in its commentaries, a complaint that Rabbi Nosson Scherman, ArtScroll’s general editor, responded to in a 2007 interview with the Jewish Press.

“It’s not a question of trying to include as many names as you can for the sake of popularity,” Scherman said. “It’s a matter of trying to clarify the material.”

“It’s not a question of trying to include as many names as you can for the sake of popularity,” Rabbi Scherman said. “It’s a matter of trying to clarify the material.”