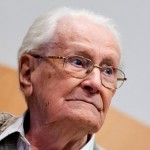 A former Nazi SS guard has said so many trains full of Jews used to arrive at Auschwitz that often two would have to wait with closed doors while people from the first were “processed”. Most of those who disembarked were gassed to death almost immediately.

Oskar Groening, 93, was speaking on the second day of his trial for being an accessory to the murder of at least 300,000 Jews at the death camp.

He has said he is “morally” guilty but had no direct role in the genocide.

The charges against the former guard relate to a period between May and July 1944 when about 425,000 Jews from Hungary were taken to the Auschwitz-Birkenau complex in Poland.

Groening, who is being tried in the German town of Lueneburg, said he was regularly assigned to the Auschwitz I section of the complex but also undertook guard duties at Birkenau, where the main gas chambers were located.

“Someone said that 5,000 people were processed in 24 hours but I didn’t verify this. I didn’t know.

“For the sake of order we waited until train one was entirely processed and finished.”

Survivors have said their arrival at Auschwitz was chaotic and deeply traumatic, with Nazi guards shouting orders, dogs barking and families being separated.

Groening described the scene as “very orderly” and “not strenuous” for him.

“They all walked, some in one direction, some in another direction… to where the crematoria and gas chambers were,” he said.

One of the survivors, Eva Kor, 81, said she did not remember Mr Groening personally but could not forget the scene.

“Everything was going very fast. Yelling, crying, pushing; even dogs were barking. I had never experienced anything that fast or that crazy in my entire life,” she told AP news agency before addressing the court.

Her parents and two elder sisters were taken straight to the gas chambers, while she and her twin sister, both 10 at the time, were used in experiments conducted by Nazi doctor Josef Mengele.

Recalling the moment she was torn away from her mother, she said: “All I remember is her arms stretched out in despair as she was pulled away.

“I never even got to say goodbye.”

On Tuesday, addressing the judges, Mr Groening said: “I ask for forgiveness. I share morally in the guilt but whether I am guilty under criminal law, you will have to decide.”

If found guilty, he could face between three and 15 years in prison.