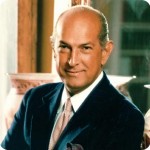 Oscar de la Renta, the doyen of American fashion, whose career began in the 1950s in Franco’s Spain and sprawled across the better living rooms of Paris and New York, and who was the last survivor of that generation of bold, all-seeing tastemakers, died on Monday at his home in Kent, Conn. He was 82.

His death was confirmed by his wife, Annette de la Renta.

Though ill with cancer intermittently for a decade, Mr. de la Renta was resilient. During that period, his business grew by 50 percent, to $150 million in sales, the NY Times reported.