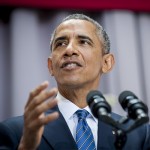 Today, the Union of Orthodox Jewish Congregations of America applauded President Obama for signing the “Every Student Succeeds Act.” The bill includes provisions from the Orthodox Union that a delegation of Orthodox Jewish leaders recommended to President Obama during a private meeting in 2012. Those provisions will greatly improve ESEA’s distribution of equitable services for all students.

This bill represents the first major reform to the Elementary & Secondary Education Act (ESEA) since 2001, when “No Child Left Behind” was passed.

In his remarks about the “Every Student Succeeds Act,” President Obama noted that the bill upholds the core values of the original ESEA. “With this bill we reaffirm that every child, regardless of race, income, background or zip code, deserves the chance to make of their lives what they will,” said the President.

Nathan Diament, Executive Director for Public Policy for the Orthodox Union, was present at the White House for the bill signing this morning. “We are very grateful to President Obama for signing this law today and ensuring that students across the country will receive the critical services they need to succeed. The revised law contains critical provisions to better ensure students in Jewish and other non-public schools will receive federally funded education services,” Diament said. “It was an honor to represent the community at the bill signing ceremony.”