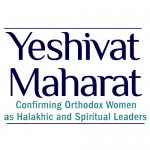 Last week, Matzav.com reported that the first graduate of Avi Weiss’ Yeshivat Maharat to take the title “rabbi” had been hired by an unnamed American Orthodox shul. At the time, Lila Kagedan, who received “semichah” this past summer at Yeshivat Maharat, said that she was recruited to join the staff of a shul, but Kagedan refused to name the shul.

The shul has now confirmed the hire. Mount Freedom Jewish Center, in Randolph, New Jersey, announced in a news release Monday that Kagedan, a native of Canada, is joining its “spiritual leadership team.” The news release did not use the word “rabbi,” instead referring to Kagedan as a “Yeshivat Maharat graduate.”

On its website, Mount Freedom Jewish Center describes itself as “Open Orthodox,” though it was previously viewed as an Orthodox shul.

Kagedan will be tasked with “teach[ing] Torah, encourage[ing] greater love and celebration of mitzvoth” and she will be asked “to provide learning opportunities for adults and children, connect with young families in and around the community and participate in lifecycle and pastoral needs alongside Rabbi Menashe East,” the shul’s website says.

Matzav.com has continually reported on the havoc being wreaked by Avi Weiss and his Open Orthodox movement, and particularly Yeshivat Chovevei Torah and Yeshivat Maharat, which ordains women in violation of the p’sak of every prominent rov and posek.

Despite most female Orthodox “clergy” from Yeshivat Maharat taking the title of “maharat,” Kagedan is the first graduate to call herself a rabbi. Yeshivat Maharat has thus far ordained about 11 students, with six serving in Orthodox shuls in North America.