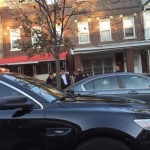 “I don’t remember anything,” the judge told JP who asked his name be withheld. “I was walking and somebody just knocked me down from the back and shoved me into the tree on the side of the sidewalk.”

Hatzala responded to the scene and treated His Honor for minor injuries to the left side of his face and hairline.

iac-log-default-460x330_1-300×215
The first person on scene was actually a pedestrian nearby who helped the judge before EMTs arrived. “An African-American woman” was actually the one who “helped my husband,” the judge’s wife told JP, expressing her gratitude for the civic-minded passerby who stepped in to help.

Investigators have surveillance videos that capture the attacker fleeing the scene and there is no indication that the assault was bias motivated, police sources say. They are asking anyone with information to call Crime Stoppers at (800) 577-TIPS (8477). Or those in the know can also log in their tips via web at nypdcrimestoppers.com.