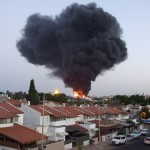 Operation Protective Edge’s overall cost for Israel has been estimated to be $4.3 billion.

The Tax Authority estimates that more than $14.6 million worth of property damage has been caused by rocket fire, and further predicted a drop of $438 million in tax revenue in 2014 because of the operation.