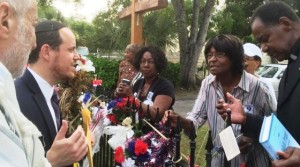 Yesterday, Open Orthodox Rabbi Shmuel Herzfeld shared in Times of Israel his impressions of a visit, along with Open Orthodoxy founder Avi Weiss, to the Mother Emanuel AME Church in Charleston for a “Nichum Aveilim journey.”

Herzfeld travelled with rabbis Etan Mintz and Avi Weiss two weeks after the murder of nine people on Wednesday June 17.

Herzfeld shares that “we asked if we could attend the bible study that afternoon at 6 pm. It was the same bible study group at which the 9 were murdered. The (sic) said, ‘Of course. Everyone is welcome.’”

“These simple words moved me a great deal. A murderer had taken advantage of their kindness and hospitality and brutally violated their sacred space but they had not changed one bit. They said everyone was welcome.”

Herzfeld relates that as he walked into the social hall of the church, “we introduced ourselves as rabbis and we were uplifted to see that two other rabbis, a husband and wife rabbinic team, rabbis Meir and Tara Feldman of Temple Beth El of Great Neck, were also present at the bible study.”

The instructor, Reverend Dr Lawrence Gordon, encouraged an interactive discussion, writes Herzfeld, who adds, “Two themes of the session became the focus of conversation. First: was it ok to be angry with God? Many were wondering if they were being unfaithful if they felt anger. A visiting AME pastor from Dayton said ‘it’s not anger, it’s questioning.’”

At one point, Herzfeld says, Avi Weiss shared “his own story of unity with his friendship with a local Baptist Church. He taught the song ‘because of my brothers and sisters, I wish the best for you.’ The entire room joined together in singing these words.”

After the healing session, writes Herzfeld, “we were then invited to take a picture with the pastors that were present. We were also embraced by family members of the murdered.”

Herzfeld, who received semichah at Yeshiva University, currently heads the Ohev Shalom Synagogue of Washington, DC. He served as the assistant rabbi under Avi Weiss at the Hebrew Institute of Riverdale from 1999 to 2004, before transferring to Ohev Sholom.

Herzfeld’s temple, Ohev Sholom, was the first synagogue in the United States to hire a Maharat, or a so-called ordained Orthodox female clergy member. Ruth Balinsky Friedman joined the congregation in July, 2013.