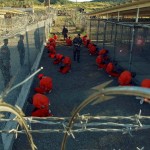 The U.S. government admitted Tuesday that Guantanamo detainee Mustafa Abd-al-Qawi Abd-al-Aziz al-Shamiri has been held for 13 years in a case of mistaken identity.

“We now judge that these activities were carried out by other known extremists” with similar names, according to a document submitted Tuesday.

Al-Shamiri “probably took explosives training at a camp in Afghanistan” and may have stayed in their safehouse, but is not linked to the 2000 bombing of the USS Cole. Read more at NBC News.