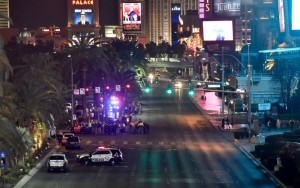 [Update below.] One person is dead and 37 others were injured when a car drove up onto a crowded Las Vegas sidewalk Sunday night, police said.

At least seven people were in critical condition after a female driver drove into a crowd of pedestrians on South Las Vegas Boulevard near the Paris Hotel and Casion and Planet Hollywood, where an event had recently finished.

The female driver was detained nearby and is being tested for drugs and alcohol, police said.

KSNV-TV reports the driver had a 3-year-old child with her and drove away from the scene before turning herself in at Tuscany Suites and Casino. Read more at KSNV-TV.