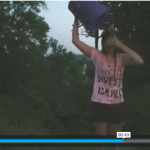 Ohio University’s (OU) student body president, Megan Marzec, posted a video online in which she performed the “ALS Ice Bucket Challenge” with a bucket of blood in order to promote of a boycott of Israel.

In the video, Marzec said that “as student senate president, I’m sending a message of student concern about the genocide in Gaza and the occupation of Palestine by the Israeli state.”

“I’m urging you and OU to divest and cut all ties to academic and other Israeli institutions and businesses… This bucket of blood symbolizes the thousands of displaced and murdered Palestinians-atrocities which OU is directly complacent in through cultural and economic ties with the Israeli state,” she added before dousing herself with the blood.

Shortly after the video’s release, the OU student senate distanced itself from Marzec’s actions, tweeting, “On behalf of the student senate, we humbly apologize for the video President Megan Marzec posted.”