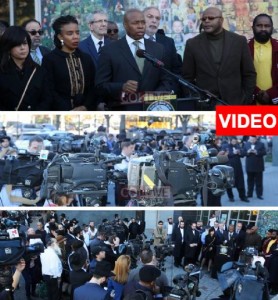 The conference gathered in front of the Jewish Children’s Museum on the main street of Eastern Parkway in Crown Heights, only blocks away from where an Orthodox Jewish man was attacked the night before.

The 34 year old man was stabbed in his shoulder at around 9:00 PM Tuesday while walking on Eastern Parkway between Nostrand and Rogers Avenue.

Police described the attacker as “a male black wearing a black hoodie and a mask.” He fled in an unknown direction and efforts are being made to find him.

The violent incident, which occurred the day before Chabad’s annual Conference of Shluchim, prompted the New York Police Department to add security to the area.

The next morning, a Jewish man was attacked while walking on Lefferts Avenue near Albany Avenue at about 6 am, by a man who punched him in the face and yelled, “I’m fed up with the Jews!” and other Anti-Semitic statements.

Borough President Adams said the stabbing attack Tuesday night by a person wearing a mask was a crime of “premeditated hate.”

“Any time that hate shows its ugly face, even when it’s covered with a mask, we as community leaders, elected officials and activists come together and put out a strong call.”

Adams praised the Anti-Defamation League (ADL) who announced that it is offering a $5,000 reward for information leading to the arrest and conviction of the individual responsible for the Eastern Parkway slashing.

“We know how to live together in Crown Heights, and we will not allow the small number of small minded people with their hatred to take away what we have,” Adams said.

Devorah Halberstam, whose son was murdered in a terror attack on the Brooklyn Bridge, said the stabbing is a message to “the Mayor, the President, the city, the country.”

“This must stopped and be nipped in the bud immediately,” she said.

The Borough President said he would himself be registering for the Kinus Hashluchim following the press conference, to show the Shluchim that “they are safe in Brooklyn,” he said.