NYC Councilman David G. Greenfield today joined with local elected officials to strongly condemn an act of anti-Semitic vandalism that occurred in the Boro Park Section of Brooklyn. A van belonging to the Hamaspik Assisted Living Facility located on 61st Street in Brooklyn was vandalized in front of that facility by a large spray-painted swastika. This is the second time that this particular facility for disabled Jewish young adults was targeted by a hate crime. Because of the nature of the crime, the NYPD has turned over the case to its Hate Crimes Unit. Greenfield was joined in his condemnation by Councilmembers Sara Gonzalez & Brad Lander, Congressman Jerry Nadler, Senator Marty Golden & Assemblyman Peter Abbate.

“As Americans, we celebrate our diversity,” said Greenfield. “Hate crimes have no place in our community and acts of religious bigotry will not be tolerated under any circumstances.”

Greenfield offered a $1,000 reward for information that leads to an arrest and conviction in this case. If anyone has any information, they should call the anonymous line of the NYPD Hate Crimes Task Force at 1-800-577-TIPS (8477).

“The reason I am offering a cash reward is to send these criminals a clear message: if you commit a hate crime in New York City we will find you no matter what it costs or takes.” explained Greenfield.

Joel Freund, the Executive Director of Hamaspik of Kings County said, “This is an attack on every American child with special needs, and we cannot let this go unpunished.” 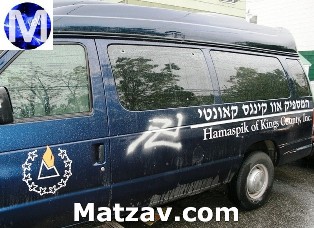 Councilmember Sara Gonzalez was clear in her condemnation, “I believe prejudice is the child of ignorance. There’s no place for it in our society and our neighborhoods are united in saying we have zero tolerance for hate crimes. These perpetrators will be found and punished to the fullest extent of the law.”

“This is the third hate crime in or near my district in the four months that I have been in office,” said Councilmember Brad Lander. “I am deeply saddened by these crimes and hope that by coming together as a community we can put an end to these outrageous acts.”

“I am very concerned about the despicable messages of hate found at the Hamaspik Assisted Living Facility in Brooklyn,” said Congressman Jerrold Nadler. “The fact that these messages appeared on the property of a Jewish facility in the heart of our nation’s Orthodox Jewish community is alarming to say the least, and a reminder that we must continue to speak out against anti-Semitism, hatred and intolerance.”

“This is an outrageous crime in the heart of our Jewish community,” said Senator Marty Golden. “There is no place in our community for this. I look forward to working with the NYPD to track down these villains and go down to court with my fellow elected officials to ensure that these villains are brought to justice.”

“I strongly condemn this recent act of hateful vandalism,” said Assemblyman Peter Abbate. “I call on the community to come forward with information so that the perpetrators can be found and prosecuted to the fullest extent of the law.”

All of the elected officials stressed the need for the community to share information with the Hate Crimes Task Force on this crime. The anonymous tip line is: (800) 577 TIPS. All information will be kept confidential and a reward of $1000 will be given by Councilmember Greenfield for information leading to the arrest and conviction of those responsible.

Finally, Greenfield lauded the NYPD Hate Crimes Task Force as “the best in the United States,” and was hopeful that this added attention and cash reward will help them find those responsible for the anti-Semitic vandalism.