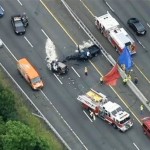 CBS NY reported that Richard Christopher, 32, of Suffern, was behind the wheel of a pickup truck when he drove the wrong way around 7 a.m. between exits 14B and 15 in Suffern and crashed into a car driven by James DeVito, according to New York State Police.

Devito, 59, of Airmont, was also killed.

There were no passengers in either vehicle.

The northbound lanes of the thruway were closed for at least two hours as police investigated, snarling traffic for thousands of commuters during the morning rush.

“It could’ve been me if I was earlier,” driver Janice Zezina told CBS 2’s Weijia Jiang. “It’s very scary.”