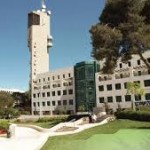 Israel has one of the highest-educated populations of any country in the developed world, according to the Organization for Economic Cooperation and Development’s (OECD) latest global education report, released on Tuesday.

The “Education at a Glance 2015” report found that 85 percent of Israelis ages 25-64 have completed upper secondary education, compared with the OECD average of 76 percent. And 49 percent of Israelis in that age group went on to tertiary education (universities or colleges), compared with the OECD average of 34 percent—the second-highest rate of any country in the 34-member nation OECD.

Israel also had a low high school dropout rate of 14.6 percent, compared with the OECD average of 24.7 percent.

“Israel has the highest percentage of adults between the ages of 55-64 who have acquired tertiary education, almost twice the OECD average, and Israel is above the OECD average in its tertiary-educated population among every age group,” the findings said.

The report said Israel was one of only a handful of countries to increase its investment in education even during the global financial crisis, devoting 6.5 percent of its gross domestic product to its education system. Nevertheless, “Israel still spends less per student for all services, across all education levels, than the OECD average,” the report said.