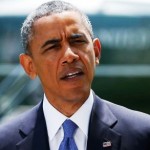 Let there be no doubt: The United States of America has always been a great friend to the people of the State of Israel. Sadly, the same might not be said of our President.

Since first taking office six years, President Obama has shown little solidarity with Israel, he’s made scant effort to disguise his personal dislike for Israel’s duly elected Prime Minister, and his administration has often been downright confrontational. In all, this is, by far, the rockiest relationship the Israeli people have been forced to endure with the United States since the inception of the modern State.
There’s no need to look back over six years-recent events say it all. If President Obama shed any tears for Shelly Dadon, a young Israeli woman stabbed to death in May by an Arab because she was Jewish, he did so privately. If our President had any concern for the three Israeli teenagers kidnapped and murdered because they were Jews, he kept those concerns well hidden for weeks. But when a lone Arab teenager was murdered by extremist Israelis (who were almost instantly arrested), that anomaly was regarded as immediately condemn-worthy by the President of the United States.
As countless acts of terror and hate are perpetrated against innocent Israeli citizens, President Obama remains silent. But today, as rockets fall on the cities of Haifa, Tel Aviv and Jerusalem, on towns big and small, on disparate communities made up of everything from the secular to the most pious-from the most nationalistic to those who have nothing to do with the Israeli government and its policies-now as the rockets fall daily and hourly, our President adds scalding insult to injury.
I wish I could say I was shocked by Philip Gordon’s statement yesterday in Tel Aviv, but, sadly, it appears to be just another reveal in the on-going saga of President Obama’s personal attempt to change national policy towards our only long-term, stalwart, democratic friend in the Middle East. In a twisted foreign policy address, Gordon, a special assistant to President Obama and the White House coordinator for the Middle East, attacked Israel as the provocateur in the current and ongoing episodes of daily terror that are visited upon its citizens. It’s Israel’s fault, he said.
More, Gordon appealed to Israeli leaders to “compromise” and negotiate with Palestinian Authority President Mahmoud Abbas, who has “proven to be a reliable partner.”

Reliable? Yes, Abbas reliably aligned himself with Hamas, a recognized terrorist organization that imposed a Taliban-like regime in Gaza that includes killing innocents, arbitrary confiscation of property, muzzling the media, and increased links to Iran and Al-Qaeda, to say nothing of its stated goal to utterly destroy the sovereign State of Israel.

In the days following the recent Hamas-sanctioned terror, the IDF targeted terrorists, not civilians, just as the United States has done and would do given a similar situation. And Hamas did what it always has always done: It targeted civilians. And its criminals hide behind human shields.
And now, as rockets rain on Israel from terrorists-many of whom were freed after incarceration for similar crimes as part of Israel’s peace negotiations with its “reliable partner”-now our President, through his surrogate Gordon, has chosen to be dangerously critical of Israel.
As there are ongoing conflicts throughout other regions of the Middle East-in Syria, in Iraq-our President is practically missing in action. Beyond the fig leaf of our own nation’s interest in foreign affairs, President Obama displays perhaps the greatest Laissez-fair attitude towards foreign policy since the debacle of Jimmy Carter’s tenure. This despite atrocities in Syria, despite the powder keg that is now Iran, despite the beheadings in Iraq by Isis. But Israel-the one nation state in the Middle East that has proven itself a consistent ally both in policy and relations with the U.S. since its U.S.-supported establishment in 1948-Israel, the lone Democracy in the Middle East, is the lone country that comes under President Obama’s harsh criticism.
The chutzpah is beyond comprehension.
Gordon’s speech has only fueled an already dangerous fire. His lecturing Israel on national security must be some kind of bad joke in the face of the regular and sanctioned terrorism that Israel endures, in the midst of a viral Middle Eastern power shift that sees more and more of the region falling under the iron rod of Islamic extremism.
A bad joke indeed. And the punch line?
“America will always have Israel’s back,” said Gordon/Obama.
Gosh, does that scare the daylights out of me.