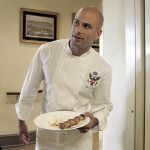 President Barack Obama on Shabbos temporarily set aside the pressures of trying to calm the world’s trouble spots and assumed the role of spectator for something more joyous: the wedding of his family’s longtime chef and friend.

Chef Sam Kass, who grew up in a Jewish family, and MSNBC host Alex Wagner were tying the knot at Blue Hill at Stone Barns, a farm-to-table restaurant, just north of New York City.

Obama and Kass have a close relationship, which Obama highlighted earlier this month by spending several hours at dinner at Kass’ apartment amid the turmoil in Iraq, Ukraine and Ferguson, Missouri.

It’s long been said that time is a president’s most precious commodity. That Obama would spend five hours at Kass’ home on one of the aide’s final evenings as a bachelor was a testament to their bond.

Obama’s rounds of golf are often his only other outings that last as long – and those games sometimes include Kass.

Obama, his wife, Michelle, and their daughters, Malia and Sasha, attended the ceremony and reception at the restaurant, which is a favorite of both Kass and Mrs. Obama. The first lady hosted the spouses of world leaders there in 2010.

Kass began preparing meals for the Obamas when the family lived in Chicago and the Obamas persuaded him to join them at the White House. He is now among the Obamas’ longest-serving aides.