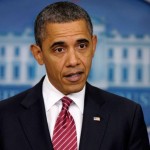 “That’s not our job,” McDonough said on NBC’s “Meet the Press.” “That’s the job of the party to make those decisions and then they’ll take a look at the agendas and the positions of those candidates.”

McDonough said that Obama, in the final 11 months of his presidency, will wait until voters pick a nominee, as he has in the past.

“When the nominee will be set, then the president will be out there,” McDonough said.