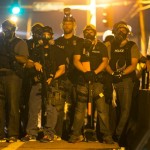 The review will determine whether the 10-year program of providing such equipment should continue after the clashes in Ferguson, Mo., which erupted after Darren Wilson, a white cop, shot Michael Brown, 18, an unarmed African-American youth to death on Aug. 9.

Images of unarmed protestors facing down heavily armored police officers were often compared to images from Baghdad, and the White House will determine if local officials have proper training for the equipment and are using it appropriately, senior officials said. The review, along with proposed legislation, could change Washington’s approach in arming local police forces. Read more at The New York Times.