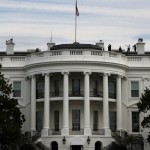 President Barack Obama’s top advisers sat down with Muslim and Sikh religious leaders on Monday to discuss the backlash their communities are facing in the wake of the Paris attacks and the San Bernardino shootings.

The meeting follows an increase in anti-Islamic incidents across the country and serves as a response to Donald Trump’s call to ban all Muslims from entering the U.S. until a vetting system is found. Sikhs are not Muslims, but have been the target of anti-Islamic violence. Read more at NBC News.