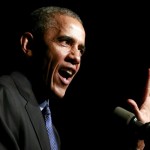 Pushing back against efforts to bar Syrian refugees from resettling in the U.S., President Barack Obama vowed Saturday that his country will be a welcoming place for millions fleeing violence around the world “as long as I’m president,” the AP reports.

Brushing off refugee worries at home, Obama crouched alongside migrant children on Saturday and declared they are the opposite of terrorists wreaking havoc from Paris to Mali. Working to put a human face on the refugee crisis, he said, “They’re just like our kids.”

The refugees Obama encountered at a school for poor children in Malaysia were not from Syria, and unlike the flood of Syrians meeting steep resistance in the U.S., these migrants had already been cleared to resettle in America. Still, Obama said their faces could have been those of kids from Syria, Iraq and other war-torn regions whose pursuit of a life free from violence led them far from their native homes.

“They were indistinguishable from any child in America,” Obama said. “The notion that somehow we would be fearful of them — that our politics would somehow lead us to turn our sights away from their plight — is not representative of the best of who we are.”

More than mere musings, Obama’s comments were intended as a direct rebuke to those demanding a halt to Syrian and Iraqi refugees entering the U.S. in the light of the Islamic State’s attacks in Paris. Obama said the U.S. had shown it can welcome refugees while ensuring security. “There’s no contradiction,” he said.

Many Americans seem to disagree. Democrats in large numbers have abandoned their president and his opposition to stiffer screening measures; forty-seven of them voted against Obama on Thursday. Having secured a veto-proof majority in the House, supporters are now hoping for a repeat in the Senate, while Obama works to shift the conversation to milder visa waiver changes that wouldn’t affect Syrian refugees.

In a modest classroom where refugee children were learning English, Obama zigzagged among art projects, puzzles and a caged class rabbit as he asked children in crisp white uniforms and neckties about their aspirations for the future. Later, as he met with older refugees who will soon relocate to the U.S., he said these children “deserve love and protection and stability and an education.”