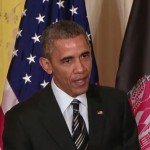 President Barack Obama expressed doubt Tuesday about the prospect of a peace agreement between Israel and the Palestinians emerging in the coming years under Prime Minister Bibi Netanyahu, and indicated that no decision would be made about changing Washington’s policy of shielding Israel at the United Nations until a new coalition is formed.

Netanyahu “has a different approach” that rejects a two-state solution, making the possibility of a framework deal “dim,” Obama said at a press conference at the White House on Tuesday, a reference to pre-election comments made by the PM – since clarified – that a Palestinian state would not be created under his watch.

After the election, Netanyahu walked back on those comments, telling NBC: “I don’t want a one-state solution. I want a sustainable, peaceful two-state solution” but stressing the grave dangers posed to Israel and the region and the rejectionist positions of the Palestinian leadership. The White House, however, has rejected Netanyahu’s clarification.

Regarding US support for Israel at the UN, which includes using its veto at the Security Council, Obama said: “We are going to do that evaluation. We’re going to partly wait for an actual Israeli government to form.”

Netanyahu is expected to form his new government over the next few weeks, following the Likud party’s victory at the polls last week.

Amid widely circulated reported indications of frosty ties between the president and the Israeli prime minister, Obama said his personal relationship with Netanyahu was “businesslike,” that he’s met him more times than any other world leader, and that he speaks to him regularly.

Obama also said that military relations between the two countries were unaffected by the current diplomatic spat and that aid to Israel to maintain its military superiority in the region would continue “unabated.”

The president maintained that he believed Netanyahu was opposed to the two-state solution, despite the prime minister’s comments to the contrary, and said the US could no longer base its policy on “something everyone knows is not going to happen.”

“Prime Minister Netanyahu in the election run-up stated that a Palestinian state would not occur while he was prime minister, and I took him at his word that that’s what he meant and I think that a lot of voters inside of Israel understood him to be saying that fairly unequivocally,” Obama said at the press conference with Afghani President Ashraf Ghani.

“So even if you accepted the corrective of Prime Minister Netanyahu’s in subsequent days, there still does not appear to be a prospect of a meaningful framework established that would lead to a Palestinian state even if there were a whole range of conditions and security requirements that might be phased in over a long period of time, which was always the presumption,” Obama said.

Obama stressed that the two-state solution would be a long-term process that would address Israel’s security concerns.

“The issue has never been ‘do you create a Palestinian state overnight.’ The issue is ‘do you create a process and a framework that gives the Palestinians hope, the possibility that down the road they have a secure state of their own standing side by side with a secure and fully recognized Jewish state of Israel,'” he said.

“It’s not just my estimation, but it’s hard to envision how that happens based on the prime minister’s statements,” he added.

The president also cautioned that the lack of peace talks could deteriorate into violence.

Obama said he speaks with Netanyahu often, and chided the press for focusing on their relationship, which has reportedly grown exceedingly frosty, and not on the issues.

“He is representing his country’s interests the way he thinks he needs to and I’m doing the same. The issue is not the relationship between leaders,” he said. “We believe two states is the best path forward for Israeli security, for Palestinian aspirations and regional stability. Netanyahu has a different approach and so this can’t be reduced to a matter of somehow let’s all hold hands and sing Kumbaya.”