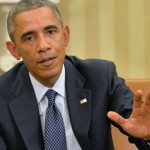 In his weekly address on Shabbos, President Obama urged Americans to refrain from panicking over Ebola and dismissed the idea of a travel ban from Ebola-affected countries in West Africa.

“We can’t just cut ourselves off from West Africa,” Obama said, noting that such a ban would make it harder for health care workers to move themselves and supplies into the region, and would motivate people flying out of the region to evade airport screenings, making cases harder to track. “Trying to seal off an entire region of the world-if that were even possible-could actually make the situation worse,” he said.

He also warned that “before this is over, we may see more isolated cases here in America,” but emphasized that “what we’re seeing now is not an ‘outbreak’ or an ‘epidemic’ of Ebola in America. This is a serious disease, but we can’t give in to hysteria or fear.” Read more at Reuters.