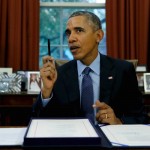 President Barack Obama will deliver an address from the Oval Office tonight about the government’s efforts to keep the country safe in the wake of the San Bernardino terror attack.

The address will focus specifically on the investigation into the attack itself and the larger threat of terrorism in general.

The last time Obama gave an address from the Oval Office was in 2010 after U.S. combat operations ended in Iraq. Read more at Politico.