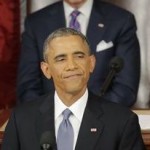 President Obama’s last constitutionally required report to Congress on Tuesday will go beyond the typical “laundry list” of policy proposals that are the hallmark of the annual address, White House aides say, instead delivering what they suggested would be a more profound statement on the State of the Union.

With a Republican-controlled Congress and a presidential campaign in full swing, Obama would be unlikely to get much of his legislative agenda through Congress anyway. And so Tuesday, aides say Obama will use the reflect on not just the year ahead, but his entire presidency — and the generation that grew up in it.

“This is the grandest stage in all of American politics,” White House press secretary Josh Earnest said. “In this case, he wants to focus most of his time on the opportunities and challenges that lie ahead for the country, and how the choices that we make today will have a significant impact on the success of future generations of Americans.”

He’ll also look back. Invited to sit in the first lady’s box are two figures from early in his campaign for president: Edith Childs, the South Carolina woman who came up with the ““Fired up! Ready to go!” chant. and Earl Smith in 2007, a Texas veteran who gave Obama a military patch from his artillery brigade in Vietnam in 2008.

Obama has signaled that he intends to reflect on some of the most momentous decisions of his presidency: the auto industry bailout, health insurance legislation, and policies he credits with a 70-month streak of job creation. In his weekly radio address Saturday, Obama also hinted at a theme of his speech to Congress: “America can do anything.”

“Even in times of great challenge and change, our future is entirely up to us. That’s been on my mind while I’m writing my final State of the Union Address,” he said.