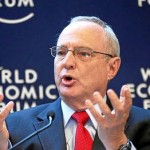 President Barack Obama has nominated Rabbi David Nathan Saperstein to fill the post of U.S. ambassador-at-large for international religious freedom at the State Department. If confirmed, Saperstein would be the non-Christian told hold the post.

“I am grateful that Rabbi Saperstein has chosen to dedicate his talent to serving the American people at this important time for our country,” Obama said. “I look forward to working with him in the months and years ahead.”

Saperstein, 66, has headed the Religious Action Center of Reform Judaism for 30 years and teaches law at Georgetown University. He previously served as a member of the President’s Advisory Council on Faith-Based and Neighborhood Partnerships from 2010-2011 and served on the U.S. Commission on International Religious Freedom from 1999-2001. He was also named by Newsweek Magazine as the most influential rabbi in America in 2009.

The ambassadorial position, which has been vacant for nearly a year, was created in 1998 to monitor religious freedom and abuses around the world.

Saperstein now faces confirmation in the U.S. Senate, where some conservatives have voiced concerns over his liberal-minded views, including comments he made concerning the recent Supreme Court decision on Hobby Lobby.