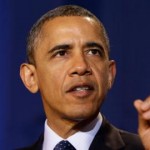 One day after a bus that had departed from the Pentagon was quarantined on Capitol Hill in an Ebola false alarm, President Barack Obama issued a video message to Americans telling them that “you cannot get it [Ebola] from just riding on a plane or a bus.”

“Ebola is actually a difficult disease to catch. It’s not transmitted through the air like the flu,” Obama said in his weekly video message. “You cannot get it from just riding on a plane or a bus.”

But on Friday, a bus was quarantined on Virginia Avenue, SE, in the Capitol Hill area of Washington, D.C.–in what turned out to be an Ebola false alarm.

The bus was carrying a group of Marines and family members from the Pentagon to a ceremony that was going to take place at the Marine Barracks on Capitol Hill. While it was in the Pentagon parking lot, according to news reports, a woman boarded it and went into the restroom. She then exited the bus, vomited and collapsed. According to a Defense Department spokesman, “the individual indicated that she had recently visited Africa.”

The bus departed for the Marine Barracks, but the woman was brought to Inova Fairfax Hospital as a suspected Ebola victim. Meanwhile, the South Parking Lot of the Pentagon was closed down, and when the bus approached the Marine Barracks on Capitol Hill it was quarantined.

A Daily Mail Online video report said that health officials had instructed passengers on the bus to monitor their temperatures for 21 days.

“Then in several days, if they confirm then that she does not have [Ebola], then they basically they wipe away the rest of the 21 days for us. So again, it’s precautionary,” Col. Dave Lapan, a Marine who was on the bus told the Mail.

Later on Friday, health officials determined the woman did not have Ebola.

Obama’s message Saturday wasn’t the first time he had said you can’t get Ebola on public transportation.

Three weeks earlier, Obama had issued a video message to residents of Ebola-stricken West African nations, saying that you “cannot get [Ebola] through casual contact, like sitting next to someone on a bus.” The video was widely circulated online, and posed on a number of U.S. embassy websites.

Last Wednesday, Dr. Tom Frieden, director of the Centers for Disease Control and Prevention (CDC), told CNSNews.com during a press teleconference that the CDC had vetted Obama’s message to African residents before it was released.

During the conference call, CNSNews.com asked Frieden: “In a video message to countries in West Africa that are experiencing Ebola outbreaks, President Obama told residents they cannot get the disease by sitting next to someone on a bus. But CDC recommendations state that travelers in West Africa who begin to show possible symptoms, or people who have experienced a high risk of exposure, should avoid public transportation, including buses. And we’ve also seen large amounts of concern regarding potentially infected people traveling on airplanes.

“My first question is, did the CDC vet this video message before it was released and posted on U.S. embassy websites, and is it true that a person runs absolutely no risk of contracting Ebola on public transportation, such as a bus?”

“I think there are two different parts of that equation,” he continued. “The first is, if you’re a member of the traveling public and are healthy, should you be worried that you might have gotten it by sitting next to someone? And the answer is no.”

“Second, if you are sick and you may have Ebola, should you get on a bus? And the answer to that is also no. You might become ill, you might have a problem that exposes someone around you,” Frieden said.

Despite Obama’s statement Saturday that you cannot get Ebola “just from riding on a plane,” Frieden also stated last week that the CDC has reached out to the 132 passengers who were on the same Cleveland-to-Dallas commerical flight taken by health care worker, Amber Vinson, just before she was diagnosed with Ebola.

Even though the nurse “exhibited no signs or symptoms of illness,” public health officials “will begin interviewing passengers about the flight, answering their questions, and arranging follow up” and “individuals who are determined to be at any potential risk will be actively monitored,” according to a news release by the CDC last Wednesday.