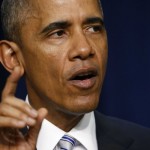 Specifically citing Al Qaeda and ISIS, Obama stressed that the U.S. is “not at war with Islam, we are at war with people who have perverted Islam.”

Obama has come under criticism for trying to disassociate ISIS from Islam, even though it calls itself the Islamic State and wants to establish a caliphate in the Middle East. Read more at National Journal.