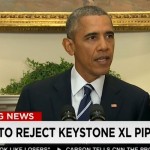 During a Friday afternoon President Obama announced that his State Department has rejected the proposed Keystone XL pipeline.

“I agree with that decision,” the president said. “For years, the Keystone pipeline has occupied what I’d consider an overinflated role in our discourse,” he said. “All of this obscured the fact that this would not be a silver bullet for the economy, nor the express train to climate disaster.”

The reason for rejecting the oil pipeline, he explained, is that it “would not create meaningful job growth,” would not lower gas prices, and would not assist in increasing energy independence. Allowing the Keystone pipeline, he concluded, would “undercut” America’s stance as a global leader on climate change.