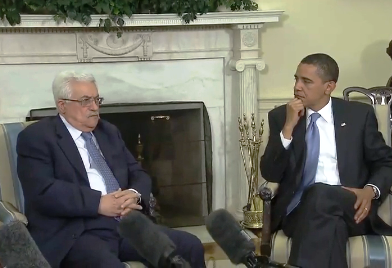 “We’re going to have to take some tough political decisions and risks if we’re to move it forward,” Obama said Monday at a White House meeting with Abbas. “My hope is that we can continue to see progress in the coming days and weeks.”

Obama had also met with Israeli Prime Minister Benjamin Netanyahu two weeks ago at the White House, where he urged the Israeli leader to make “tough decisions” for peace.

Negotiations between Israel and the Palestinians have stalled recently over the Palestinians’ refusal to recognize Israel as a Jewish state, one of Netanyahu’s top demands.

At the White House, Abbas said that the Palestinians have recognized Israel’s legitimacy since 1988 and that in 1993 “we recognized the state of Israel.”