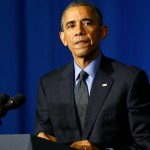 As reported earlier by Matzav, nearly 200 nations have agreed to an accord that will significantly curb greenhouse gas emissions in the hopes of slowing climate change.

The agreement comes at the end of a two-week-long conference, known as COP21, in Paris. The deal, which aims to prevent a 2 degree Celsius (3.6 degree Farenheit) rise in atmospheric temperature, is remarkable because it requires both developed and developing nations to take action. For years, environment-related pacts have exempted developing nations from making changes to limit greenhouse gas emissions.

In a statement issued yesterday, President Barack H. Obama declared that, “We came together around a strong agreement the world needed. We met the moment,” he said. “We’ve shown what’s possible when the world stands as one” and that the deal “represents the best chance we have to save the one planet that we’ve got.” Read more at The New York Times.