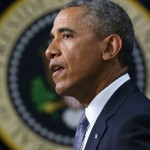 In his interview with the New York Times’ Thomas Friedman over the weekend, President Barack Obama was asked if he is worried about Israel’s “long term survivability.”

“It is amazing to see what Israel has become over the last several decades,” replied the American president. “…Think about the dream of the early Zionists and to have scratched out of rock this incredibly vibrant, incredibly successful, wealthy and powerful country is a testament to the ingenuity, energy and vision of the Jewish people.”

“And because Israel is so capable militarily, I don’t worry about Israel’s survival. …I think the question really is how does Israel survive. And how can you create a State of Israel that maintains its democratic and civic traditions. How can you preserve a Jewish state that is also reflective of the best values of those who founded Israel. And, in order to do that, it has consistently been my belief that you have to find a way to live side by side in peace with Palestinians. … You have to recognize that they have legitimate claims, and this is their land and neighborhood as well.”

Leave a Reply to So Simple! Cancel reply