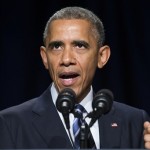 President Barack Obama stirred outraged with his speech at the National Prayer Breakfast Thursday, comparing the atrocities committed by ISIS to those of Christians “in the name of C—-.”

“Unless we get on our high horse and think that this is unique to some other place, remember that during the Crusades and Inquisition, people committed terrible deeds in the name of C—–,” Obama said. “In our home country, slavery and Jim Crow all too often was justified in the name of C——.”

“So it is not unique to one group or one religion,” Obama said. “There is a tendency in us, a simple tendency that can pervert and distort our faith.”

Appearing on “The Steve Malzberg Show” on Newsmax TV, conservative commentator Pat Buchanan fumed at Obama comparing the extreme barbarity of ISIS to the Crusades.

“He’s trying to give them all equivalence to what happened in the 11th century to what’s happening today? It’s astonishing,” Buchanan said.

“The whole idea of the Inquisition in Spain – I mean these things are hundreds of years ago. That was a 30-year war long, long ago.

“I can’t think of any atrocities that have really been committed in the name of Christ … There’s no justification anywhere in all the books of the New Testament for any kind of violence on the scale of what we just saw with that Jordanian pilot.”