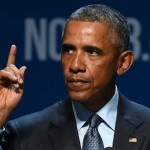 President Obama challenged critics who suggested that he was anti-Semitic as he continues to promote his nuclear deal with Iran, ignoring Israeli leaders who are expressing concerns about it.

“There’s not a smidgen of evidence for it, other than the fact that there have been times where I’ve disagreed with a particular Israeli government’s position on a particular issue,” Obama said in an interview with Forward.com when asked how he felt about the accusation.

Obama asserted that he cared deeply about Israel, which is why wants to be honest about his views about their security. But he admitted that he was more upset about people who criticized Jewish members of his administration for supporting the deal with Iran.

“I get probably more offended when I hear members of my administration who themselves are Jewish being attacked,” Obama explained.

That kind of rhetoric, he says, reminds him of the “being black enough” accusation among African-Americans.

“You saw this historically sometimes in the African American community, where there’s a difference on policy and somebody starts talking about, well, you’re not black enough, or you’re selling out,” he said. “And that, I think, is always a dangerous place to go.”

In a webcast interview on Friday, Obama used his heritage to sympathize with the persecution of the Jewish people.

“I think as an African-American I understand – history teaches that man can be very cruel to man and you have to take threats seriously,” he said.

Obama also talked about eating bagels during his interview, declaring that poppy seed bagels were his favorite.

“And what do you like on a poppy seed?” Jane Eisner, the editor of Forward.com asked.