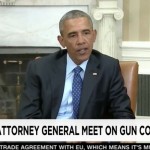 After meeting with Attorney General Loretta Lynch on Monday, President Obama said that he is confident that his forthcoming executive actions on gun control are constitutional.

Obama is expected to make an executive order to curb gun violence in the next few days.

Administration officials have said that one idea under consideration is the expansion of background checks for people purchasing from dealers that sell a large number of arms, which would include sales at gun shows. Read more.