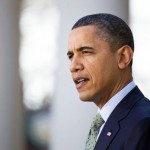 The nation is less racially divided today than it was six years ago, President Barack Obama says.

In an excerpt from a 40-minute interview the president gave National Public Radio on Dec. 18, which was made available Friday, Obama asserted that low morale about race relations is exaggerated by the reactions across the country to recent racially charged violence, including the deaths of unarmed black men at the hands of police and the revenge slayings of two New York City Police Department officers.

Asked whether there’s more racial division now than when he took office in 2009, Obama replied, “No,” NPR reports.

“I actually think that it’s probably, in its day-to-day interactions, less racially divided,” he declared.

The president’s assertion, however, appears to contradict what recent polls have found.

The president’s optimism on race relations came just a day after first lady Michelle Obama and the president detailed the racial prejudice they’d experienced in their lives.

“I think people forget that we’ve lived in the White House for six years,” the first lady told People magazine.

“Before that, Barack Obama was a black man that lived on the south side of Chicago, who had his share of troubles catching cabs.”

Added the president: “There’s no black male my age, who’s a professional, who hasn’t come out of a restaurant and is waiting for their car and somebody didn’t hand them their car keys.” Read more.