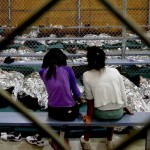 The Obama administration is preparing the nation’s schools to accept thousands of new students who illegally crossed the southwest border and are now awaiting trials on their possible deportations.

A fact sheet from the Department of Education sent to states and schools on Monday highlights the children’s right to attend public school.

It says all children in the United States “are entitled to equal access to a public elementary and secondary education, regardless of their or their parents’ actual or perceived national origin, citizenship, or immigration status.”

The prospect of tens of thousands of children mostly from Central American countries attending school as they wait for their immigration status to be decided has the potential to be explosive after this summer’s emotional public debate about the border.

Several Republican governors have blasted the federal government for releasing many of the minors to sponsors in their home states, and protests in which demonstrators blocked buses from delivering immigrants to shelters erupted in June and July.

Now some state officials are worried about the additional costs they’ll endure from educating the children.

“There are many consequences of the federal government’s failure to secure the border and the fiscal impact of educating unaccompanied alien children is certainly one of them,” said Travis Considine, a spokesman for Texas Gov. Rick Perry (R).

Around 63,000 children, mostly from the Central American countries of Honduras, El Salvador and Guatemala, have been apprehended this year trying to cross the border.